Well here we are already halfway through the half term break. It's been a mixed bag weather wise. Quite chilly a couple of days ago. Chilly enough, in fact, to light the first fires of the season. Lovely, lovely coal fire.... sigh... it's so cosy and toasty. Sadly, weather has turned and it's wet and mild now so no more fire for a while. The problem with a real fire is that you can't exactly turn it down or off so you end up lounging around in shorts with all the windows open if it's not really cold enough (hmm.... does this sound like the voice of experience you all wonder. And you are right!)

Monday was a wonderfully cold and frosty but sunny day. We had a hard frost and the leaves on the trees were simply throwing themselves to the ground. Almost like some kind of leaf snow at times. Lots of crackly noises too.

It was just too nice to stay indoors so we wrapped up and headed off to the park.

The grass in the bottom end of the park was smothered in a sumptuous golden carpet of fallen leaves. So we just had to spend ages kicking it about and foraging for late conkers.
Lots of stuff to see at this time of year. We especially like some of the fungi you see around the trees. Haven't got a clue what sort of fungi it is but it looked lovely.We thought it could be a tiny fairy village and that each mushroom was the roof of a cosy little fairy cottage.
Then off to the river to have a quick game of  Pooh sticks. Lots of leafy mess on the steps to kick about.
So that was Monday.  Lovely cold crispy day. Back home to a roaring fire and hot chocolate. Fab. Tuesday was a damp squib of a day and we lounged around until lunchtime in our PJs watching scooby-doo. Also great fun. Then we finally roused ourselves and went out to do some shopping. Made some progress on socks for me which I'll remember to photograph for you this time!

Today we went to see Despicable Me. We always go to see a film in the hols and sometimes the offerings are a bit hit and miss. Fell asleep during the Cats and Dogs movie so slim was the plot and interest. Today's choice was really good though. If you haven't seen it, you should, it's very funny and a bit moving too at times. I love the minions and want one as a pet.

Older girlie wants to go and see the Owl film that's out at the moment. In fact the Raptors were at the cinema today with some beautiful owls. There was an eagle owl, a barn owl, a couple of tawny owls and some other but I'm ashamed to say that I couldn't tell you what they are. Beautiful though.

Finished my socks!Yay! Bit too late and dark to take a picture. Tomorrow I promise.
Posted by Padiham Knitter at 21:09 1 comment:

Email ThisBlogThis!Share to TwitterShare to FacebookShare to Pinterest
Labels: Nature, Out and About

Well it's finally the half term holiday. Yay! A week off to regroup, recover and get organised. Not been much in the way of blogging from me but will attempt a bit of a catch up.

What have we been up to. Well, the walking boots have been on. Only one major trip this month for all of us when we went up Pen-y-Ghent one of the three peaks of the Yorkshire Dales. Nick has been working quite a few weekends lately so we've been out with the Grandparents a couple of times and then on Nick's birthday weekend had a childfree day to go out and about on the bike. This involved a trip down to Leamington to visit my sister-in-law and the obligatory trip to Web Of Wool to pick up some lovely sock yarn for one of the swaps I'm currently doing on Ravelry. Then called in on stepson the elder to see how he's getting on. He's doing ok and due date for baby is today! Nothing doing yet though.... it's a waiting game now.

It was a bit of slow start for the girls on this walk taken from Wainwright's "Walks in Limestone Country". But once we hit a limestone ledge they got going and had a whale of a time scrambling around and being "queen of the castle".
On this walk you take a little bit of the Pennine Way and a little bit of the Three Peaks walk.

Reached the summit and the cloud came sweeping down. Ate our butties in the clouds with nothing much to see.  But it finally lifted and we got the obligatory summit shot.
Despite lots of cloud and a bit of drizzle on the summit it was a really good day out. After all the Lake District love over the summer it was nice to rediscover the Yorkshire Dales which, while not as dramatic as the Lakes, is a truly beautiful place with a unique charm of its own. Rugged and wild and unlike anywhere else I can think of really.

Nick working the following weekend and forecast looked good. We teamed up with my mum and dad and headed up to Silverdale for a walk around Eaves Wood and the Pepperpot. The PepperPot is a quirky little tower that was built to celebrate the golden jubilee of Queen Victoria in 1887 and marks the summit of Castlebarrow. At Eaves Wood the whole hillside consists largely of ancient and undisturbed woodlands. The bare limestone with its thin soil is home to lots of yew trees, while deeper soils support oak and lime trees. There is also ash, beech, birch, hazel,larch, pine, hawthorn and holly (Not to mention areas of grass and heather.) Really lovely and deserving of its AONB status. (Area of Outstanding Natural Beauty)
Fleetwood

Not the first thing that springs to mind on a glorious late autumn sunny day but well worth a stroll along the coastal path. Also the home of Fisherman's Friends throat lozenges. Contrary to what's shown in my piccies there were lots of people about doing all kinds of things. Walking dogs, playing on the beach, flying kites, fishing, cycling, jogging, really making the most of a treat of a day weather-wise.
The views across the bay to the Lake District was gorgeous but a combination of low, strong sunshine and a dying camera battery prevented any photos of that. But honestly it was great!
We walked along the coastal path to Cleveleys and it was fabulous. Cold and crisp and so bright. The sun is so low in the sky at this time of year that at times it's almost blinding.
Sally really enjoyed herself walking along the sea wall. Made everyone who passed us smile too.

So you seen been up to quite a lot recently. There has also been some knitting/crochet action too. Some birthday socks for Nick and an iPod sock for a work colleague with the leftovers. There's been a couple of hats and an infinity scarf, another BSJ, some fiddlehead mittens and a pair of socks for me. Have I taken any photos. No. Doh!
Posted by Padiham Knitter at 21:12 2 comments: 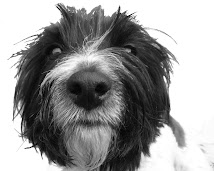